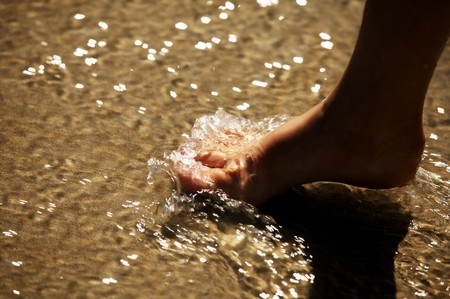 Beware the Shallows of Neutrality

When we become more neutral, fewer situations trigger us, cause us to react or give us symptoms.

In neutrality work, we often look at opposite extremes.

The extremes map out the path of experiences or thoughts we may need to get neutral to, so we are more calm and react less to things in our life.

At first, it’s easy to define a superficial or narrow range of opposite experiences or thoughts to get neutral to – and think “I’m done”.

This is a common trap – staying too shallow in the waters of neutrality.

When we are narrow or shallow in our neutrality, we may only be neutral to 1000 experiences, thoughts or situations.    This is clearly a decent improvement from being stuck in one experience or issue, but we can miss just enough that the original “bother” gets a short rest, but resurfaces with a fury later on.

Going deeper at the extremes, we expand our net – finding more scenarios and get a wider neutrality clearing.

So, we can get truly neutral and eliminate reactions when we:

Have we gone far enough?

If we think we’re neutral (enough), but still sense a reaction, we’re not done . . .
there is something left, something deeper to get neutral to

Looking deeper, we can uncover a different, but related thread or root that is perpetuating the reaction..  Sometimes, it’s not just one (hidden) button, but several or an entire dashboard of buttons!

The Session  –  Leaving The Shallows For Deeper Water

We will now describe a more concrete example of shallow or narrow neutrality and how going deeper uncovers a more significant or core issue that leads to a larger energetic shift or change.

Let’s examine a session – where a person begins stating a concern like: “I worry about my health”.

Interviewer:   So, what bothers you about your health?

Person:  I have this fear of dying from a severe health problem…
Interviewer:  OK, let’s feel into that a bit.   When we check your energy, health is not the #1 issue – it’s actually (intuit/insight)  number … 9, so there are 8 other things that have more an effect than health on you.   Let’s see – and dying does not energetically weaken you.   I mean, logically, we can understand what it means, but energetically – your energy is pretty strong and neutral with the thought of it.

So, all this means is – what you mentioned (i.e. health, dying)  – are not the real issue(s) bothering you.

Aside:   Many people that do neutrality work – paint the dying scenario as the real issue, biggest bother or farthest extreme.   But, often this scenario doesn’t check out energetically… which means we’ve missed the mark – or – we’re still too shallow or narrow in our neutrality.

So, your energy seems to indicate there’s something more.    Can you think of something deeper or maybe more extreme than the thought of dying?

Person: I don’t know
Interviewer:  (prompting) Hmmm.  Well, what about leaving your family?   That seems energetically “weaker” – for you – than the thought of dying…. so let’s go there first…  Let’s say, regardless of the reason, you’re forced to leave your family…

Person: OK, and I’m homeless
Interviewer:   Good, that’s energetically weaker than just ‘leaving’ when I make the comparison… it’s more extreme.
So, what would bother you about being homeless?

Person:  Well, I don’t have anything…
Interviewer:   So, having nothing bothers you   But, let’s see (insight) – well, that’s not entirely true.
You do have your clothes… and a few cardboard boxes you live in – and maybe a rusty shopping cart…

Person:  Very funny, OK, I do have some things.
Interviewer:   But, what if someone steals the few things you do have?   That’s even worse – and energetically weaker…  and that’s more like losing everything, right?

So, let’s summarize the stories we followed in your energy.    We found something energetically weaker for you than health problems, weaker than dying, weaker than homeless…

Interviewer:  (continuing)   So, let’s assume you lose everything – and remember, energetically, for you, we found this weaker than dying and all the other things mentioned so far.

Now, what would bother you about losing everything?

Person: I guess if I lost everything,  I wouldn’t know what to do.

Interviewer:   OK, so, let’s say … there would be a need to …  (insight) …  depend on others.   And your energy dips when I examine that whole experience for you…  So, really, you dislike being dependent on others…

Person:   Yes, I really don’t prefer to depend on others… for my whole life..

Interviewer:    So, let’s summarize.   We found 2 things “energetically” weaker/worse than homeless… “losing everything” – but the weakest for you is:

Person:   Dependent and stuck there…
Interviewer:   .. And being completely and totally dependent on others – for the rest of your life.

Person:   It’s a good thing I don’t have kids
Interviewer: OK, that was weaker.   So, something more extreme … you’re dependent for the rest of your life.   And, you also have people depending – on you … and even more extreme energetically … dependents that you can’t provide for.

Interviewer:  So, the thought of dependency is a real bother for you…
OK, (intuit/insight) – let’s just say that’s part of it – but it’s not what you think …

The Session – Almost There

A person came in with a stated worry about their health.   Initially, we followed the story in their energy – and got generally neutral to the homeless scenario  –  but, as we progressed, there were other things even more to the extreme…

There are often deeper layers of things to get neutral to.

Now, let’s paint the two extremes and travel from the shallows of neutrality to the deeper waters that will create the largest energetic shift …

Time to Get Neutral – and be Surprised

Person:  OK, where do we go next?
Interviewer:  So, the next step is to get you neutral to the extremes of “dependency” – painting the widest extremes.

Here are the two extremes:
First extreme.   Let’s get you neutral to forever being dependent  …
Well, you’re actually already strongly neutral to that ...

Interviewer:   Second and opposite extreme… Let’s get you neutral to being independent..  as a matter of fact COMPLETELY INDEPENDENT!!

That’s the extreme where the weakness is!!

So, the one extreme you most need to get neutral to is INDEPENDENCE.    That’s not what you expected – was it?

Person:   That was a strange shift I just felt..

Interviewer:  OK, let’s go back to your original assertion…
Now, when you think about your health… do you feel the same or different?

Interviewer:   It not that significant anymore, right?   That’s an improvement – you’ve changed in just a few minutes.

When we have unresolved bothers, our energy is more likely to attract situations, experiences, etc., that cause us to react.

When we find the core / real issue by checking the energy – and get more neutral, we can immediately shift and change in the next moment.

We started with a stated health concern.   Since we made no assumptions, and were neutral:

In this example, the real issue wasn’t about health – and dependency was only part of it, but being independent is what we needed to get most neutral to…

Why?   Because for many, being independent means all choices are our own – and having too many choices  (and being totally responsible for them)… weakens the energy of some people… and…

… affects us energetically – more – than – dependency – and either:

There can be other directions and threads to pull at with neutrality.  This is just a simple example – every person and situation is different.