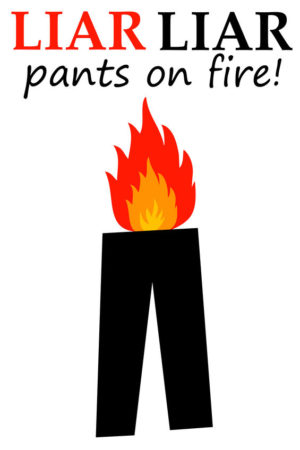 If someone lies to you,
would that bother you?

What can often bother us about lies or lying or untruths … in general… are things in our own energy  (or influences)
… that we have to identify, clear or get neutral to.

Huh?   What’s there to get neutral to? Shouldn’t it BOTHER me if someone lies?
Shouldn’t I WANT people to tell me the truth?

So, what IS the truth?

Many of us are bothered by … untruths (lies) …
… but also when someone tells us something … whether it’s true (or not true).

Judgment of what is true or not true – is a common neutrality – and energetic – block to noticing improvement.

On average, the energetic effect of lying (or more accurately judging some tale or story) – affects us:
1)  5x more ( when someone tells us directly) vs
2) 3x more if we hear it (3x) radio/tv or
3) 2x more if we read it

So, let’s begin in the middle of a session – where lying came up.

Practitioner:   (Intuit..)  So, your energy is telling me …  okay, let’s say, if someone lies to you, would that bother you?
Client:   Yes, it bothers me a lot when others lie to me.

Practitioner: What went weak first is “truth” – but more specifically –  “I don’t want to know (the truth)”… (When Knowing Is Painful)

… you (and ancestors) have past experiences … when someone told you the truth, it was worse than not knowing (the truth).
Hearing, but mostly knowing – the truth – actually caused more grief than the untruth(s) – or of not knowing.   So, your energy rejects – and/or makes it hard for your to
< accept/acknowledge/recognize> and shift – when you hear – or are told – truths.

What I get from your energy is;  there is some “coping mechanisms / false tools” energy you’re using to sidestep.
(the 6 false tools are:  1) suppress, 2) deny, 3) lie (to yourself), 4) practice forgetting, 5) numb yourself, 6) shut yourself down )

In order of “highest” weakness:

All these “coping mechanisms” create a pile of cumulative effects (dynamite) that gets bigger over time… until it lights off (trigger) and causes an explosion.

That’s the reaction we sense…

Client:  But, how do I get neutral to people lying?     That makes no sense.
What if someone HIDES the truth from us, keeps secrets?    Shouldn’t we want others to tell us the truth and not hide or lie?

Liars
whose problem is it, really?

Practitioner: (aside)
This isn’t a judgment or philosophical discussion about justice – or whether a “bad deed” should lead to => punishment… or that we or someone should “hold someone accountable” for their lies to us… or punish them.   If those thoughts come up, it’s indicating another layer we have to clear and get neutral to.   Most likely we – or someone in our ancestral chain – needs to resolve / delete all the karmic effects and experiences related to lying, punishment.

We do these energy clearings– ultimately – so

Practitioner:    (continuing) Well, that’s a reasonable thought process/list of questions…
… all those things you mention, “hiding“, “secrets” – we should bookmark as “things to get neutral to”.

Let’s say you watched 2 random people … and saw one person lie to another person, wouldn’t you think it’s the liar’s problem, yes?

Client:   Of course, it’s their problem!

Practitioner:   But, yet, when someone lies to you – you take it on as your problem (to solve)… by your “bothered” reaction.

Client:    I get it, it’s really NOT MY PROBLEM – if someone lies to me… but it’s hard concept to grasp

Practitioner:  It’s really the ENERGY we take on or resonate with.    And, it’s harder to LET GO …  of thinking it’s OUR problem …
We’ve been programmed by societal, cultural and religious “norms” to react as if it’s our problem to solve, as if we’re the judge, jury and enforcer of punishments.

So, at the very least, examine your own reaction for things to get neutral TO...   It may be you have similar experiences and when you SENSE either truth or untruth, it triggers your own experiences of misleading, of telling lies (even white ones) – that have not been resolved … in your own energy.

Whether things – in GENERAL – are true or not true … or whether someone tells us something that is true or not true, it’s best we be neutral about it and not be reacting.

Your neutrality
changes the situation

We need to be neutral with information – in general – because many of us are affected by what we READ or WHAT’S TOLD TO US, whether it’s true or not true

But let’s get back to lies and truth.     We all have experiences of someone telling us what they think or believe … or is collectively believed – to be true… that later turns out to be false.   There are many examples I won’t go into here.

Client:  Shouldn’t I want/expect others to (always) tell me the truth?

Practitioner:   Well, there are several ways to look at truth, lies and neutrality.

We could be simply misled (by others) who aren’t intentionally trying to lie to you.    They just don’t know the truth.

Client: “My shoulder hurts.” (i.e. I think I know the truth, something is wrong with MY SHOULDER)
Practitioner: “Well, it’s not coming from your shoulder”.  (“shoulder” = not true ~~ a lie – giving yourself “not the right answer” is a lie to yourself)

NOTE:   People lie to us every day..  most times because – simply – they just don’t know the truth.    Telling us something that isn’t the truth adds energetic weight to the “(someone’s) lying to me” weakness/neutrality.

Let’s get you neutral to the widest extremes:

The “everyone telling me the truth“ – most would logically assume – is “strong” /  preferred – and – energetically not the issue.

But intuitively, “truth” – that’s where the weakness is – surprise!

The person’s ENERGY –  and the reality is – most people actually go weak to –  hearing/knowing/accepting truth.   They would rather not know – the truth – even if they verbalize:   ” I want to know (the truth)”.

They have experiences where “the truth hurts”.   It’s a cliche – often encoded in a person’s energy, but not in their awareness.

You following?   Another way of saying it, is a YUEN -ism Dr. Yuen uses

Client:  I think so, neutral to the energy of true or not true

So-called facts that we take as truth – are often elastic, even just opinions – even fleeting things – changing with the times.
Facts are often just:

Dr. Yuen once said, “there’s only one thing worse than a parrot, and that’s a BUNCH of parrots.”

Google is not a truth barometer

We need truth that applies in your specific situation at hand.    Don’t mistake so-called facts (from others, Google or otherwise)  for (your) truth – in this moment – and for you.

The stories people present, accept or acknowledge as factual – about their situation – are most often found energetically – to be not true.     How do we know we don’t have the right answer.    Because – nothing is changing.

So, the “information effect” is a huge energetic block for some people to overcome.    The solution:  Learn to getto & be neutral to information.

Practitioner:  We can resonate with collective “information effect” or just a “wrong answer” energy of our own, or some other places… or the collective.

Client:  I felt a shift when the “true or not true” came up

Rather than focus on what’s true or not true.. it’s better to instead GET NEUTRAL to any information, true or not true.    This gives us the maximum choices of what to believe at any given time, but also to “let go” of that belief – in the next moment (to neutrality).. so we don’t get into some mental struggle with ourselves or with information.